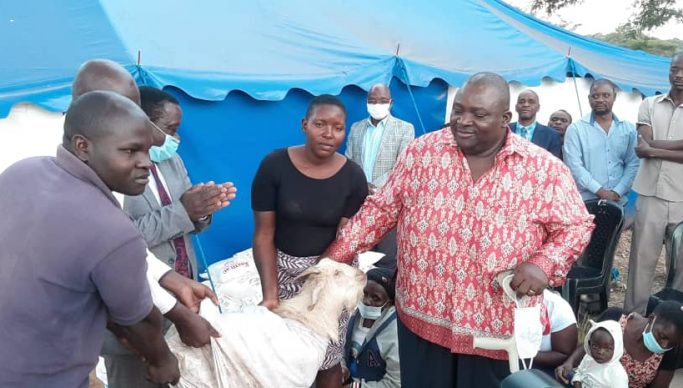 Today 27 April is the day Zimbabweans remember the death of Mbuya Nehanda a spirit medium, as prominent businessman Jimayi Muduvuri who is also the founder of a disability organisation Muduvuri Rehabilitation and Empowerment Foundation (MREF) has donated half tonne of mealie meal, goat, groceries and Covid 19 resources including sanitizers all together worth US$1000 to Broad Alliance Against Sanctions – Zimbabwe (BAAS-Z) who are camping outside the United States of American Embassy in protest against sanctions.

Speaking at the hand over ceremony held just outside the US Embassy the chairman of Coalition Against Sanctions -Zimbabwe (CAS-Z) an organization made up of churches, the disabled, war veterans, the business community and other civic organisations said, “it’s high time America should consider the lift of sanctions as we are already as a world been sanctioned by the global pandemic Covid 19, hence there is need to unite and fight against coronavirus not each other (nations to nations) by keeping the economic embargo in place”.

He also talked about the death of Mbuya Nehanda who was killed on the 27th of April during the liberation struggle by the colonial masters. “As l am working with different organisations across the nation in the fight against Covid 19, l have realised that there is need to support our fellow brothers and sisters who are in the struggle and it is now 396 days in protest against illegal sanctions,” said Muduvuri. He also added that the sanctions are affecting the progress of the nation and are affecting the ordinary people. “I have brought these groceries and we are going to slaughter this live goat in remembrance of how Mbuya Nehanda was killed by the same people who are imposing economic sanctions on an already suffering nation despite the fact that President ED Mnangagwa has open hands for everyone to come through his Zimbabwe Is Open for Business agenda,” added Muduvuri.

Speaking at the same event ZANU PF national commissar and deputy Minister of Defence Cde Victor Matemadanda said “the embargo had harmed ordinary people, contrary to claims that it is targeted at specific individuals. They are not targeted at all, they are none selective as they are affecting everyone including those who are calling for their stay thinking that they are making life hard for ZANU PF. These sanctions against Zimbabwe must be lifted in order to facilitate a sustainable solution to the challenges that are currently facing Zimbabwe”.

In addition to that, Cde Matemadanda praised members of Broad Alliance Against Sanctions who are camped at the US Embassy says it is now 369 days kids were born the same as what happened in the liberation struggle. “You are so strong and very clear on what you are standing for if it was some of us maybe we would have retired staying here in the first week. Every time when there is a fight of a noble cause in Zimbabwe heroes are made you are going to be written in the book of Zimbabwe heroes. You are going to see that when you win this fight we are going to celebrate more than you who fought, it is everywhere”, added Matemadanda.

The donation was recieved by chairman of BAAS Mr. Calvin Chitsunge. Speaking after the handover ceremony BAAS co-founder and public relations officer Sally Ngoni said, “we are happy to see that we are speaking with one voice all organisations speak against sanctions and we are against the West reason of imposing sanctions. Thank you for your support we really appreciate and this will also give us strength along the way to realise that there are people who are with us in this noble cause.”

Some government critics see no effects on the economy by having or not having sanctions in place as they insist that the economy is being destroyed by corruption. While others are of a suggestion that America and it’s allies should prove the Zimbabwe government wrong by removing the sanctions and expose them to prove the fact that corruption is the real enemy of economic progress.