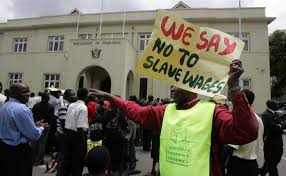 Civil servants representative body the Apex Council and its affiliates from different labor unions have declared today (06 November 2019) that they will no longer go to work but rather stay in the streets demonstrating every week for they have seen that petitions are not yielding any fruits.

This comes after a demonstration by civil servants against the government over poor salaries in what they described as a fight for food and better living conditions. The aim of the demonstration was to demonstrate peacefully by marching to the offices of the minister of labour and social welfare and to the offices of minister of finance and economic development and submit their petition tabulating civil servants grievances to be addressed.

In no certain terms, it did not go as planned as members of the police in riot gear denied the incapacitated civil servants marching rights to the intended offices to hand over their petition. There was a heavy and massive presence of the man in black gear with schamboks barricading Livingston Avenue Street from end to end congesting them in one place.

Being denied the right to march and to hand over their petition, leaders of civil servants labor unions who were present agreed that civil servants will no longer go f petitions proved to be null and void but demonstrations will continue every week and shall spread to other provinces.

Progressive Teachers Union leader Raymond Majongwe tore the union’s petition apart in front of the crowd as a sign of proving they done with petitions.
“What we are seeing today is a symbol of a system that has failed to address its problems, the presence of the police is uncalled for unconstitutional and unprovoked their aggression against workers who want to hand over their petition, not a grenade but a piece of paper is pregnant with meaning and lessons”

Amalgamated Rural Teachers Union leader Obert Masaraure rubber-stamped the words of his counterpart and said that we deserve better as civil servants.
“ We are crying for salaries equivalent to what we used to get last year in United States Dollars or at interbank rate of the day. The struggle continues comrades and we are not going back for petitions are not working as we have all observed today, we have tried it several times and still, we get nothing out of it. More demonstrations are coming”