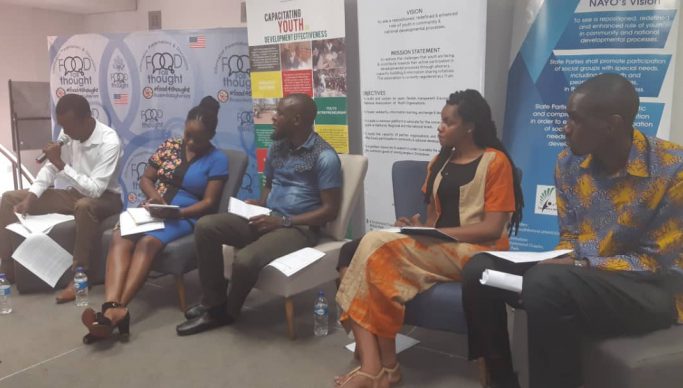 Electoral accountability too Centre stage at meeting organized by the National Association for Youths Organization (NAYO). Young people from different political parties, churches, people with disabilities, civil society expressed anger in which they are being sidelined in national issues.

Speaking during the dialogue MDC A youths Secretary-General Ostallos Siziba, mentioned that young people are always being referred to as leaders of tomorrow but they are sidelined from decision making processes in the country. He went on to challenge the lawmakers to include young people starting from giving them space in the political arena.
He referred to section 91 of Zimbabwe’s constitution which spells out minimum presidential age limit for a President and Vice President set at 40 years. Civil servants are made to compulsorily retire between the ages of 60-65 years, whilst Presidents can be elected and remain in office until they are 90 years old, and you say young people are leaders of tomorrow.

During the same event Rairo Gunguwo who was one of the young people who contested in just ended elections urges young women to actively participate in national issues. She went to present about exclusion to inclusion of women demanding electoral accountability in Zimbabwe.
Through the experience she got during her campaign, she said she found out that women were left behind despite constituting the highest number in our population. Young women need to be educated in order to participate in national issues and take up their space.

Also representing vulnerable groups in demanding accountability, Paida Chimhini urges them especially those living with disabilities to venture more into the political space not to wait to be given proportional representation seats. She went on to encourage those vulnerable groups to equip their members with skills so that they can have knowledge of participating in national issues.

In giving his vote of thanks and closing remarks, National Association for Youths Organization (NAYO) Board Secretary, Dr. Prolific Mataruse, encouraged young people to take part in national activities, but also warned them about challenges faced in fighting for space especially in Zimbabwe. He gave an example of himself being arrested and charged with treason after attending a meeting which was to empower young people.

He also urged the youths not to wait for elections and to start demand accountability, and to work hard as well teach other young people in issues of taking part so as to foster inclusion.