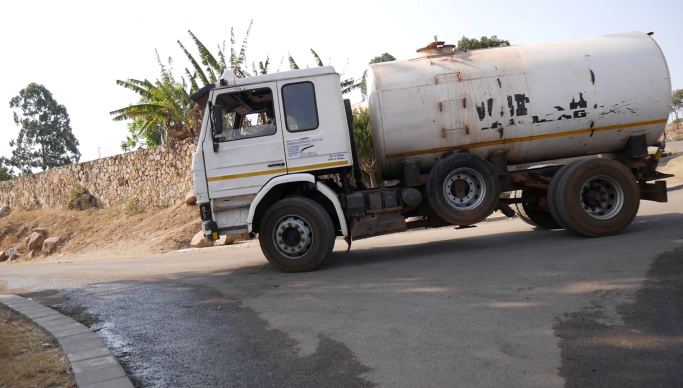 On the 11th of September 2020, a community in the leafy suburb of Borowdale Brooke was gripped by horror and irreparable loss when two teenagers lost their lives to a speeding bulk water truck.

The teenagers who were aged 13 and 14 are said to have been riding on a bike when they were hit. One of those died instantaneously and the other one died immediately after being admitted at the hospital.

Residents expressed concern over the conduct of bulk water trucks whom they accuse of reckless driving and posing a serious threat to the community through their unregulated movements.
Driven by the loss a residents association in the area wrote a petition to the Nyagui catchment council seeking their intervention on the matter.

Homeowners in the area want a Commercial water abstraction business operating from number 19 Forest Road in Borrowdale Mount Breeze which happens to be a residential area to stop operating. Borehole water yields for the neighbouring households is said to have been adversely affected by commercial water abstraction operations at number 19, which is situated on lower ground compared to the affected households. There is no municipal water in the area and people rely on wells and boreholes for water.

According to the petition, the business at number 19, run by the late liberation icon’s widow James Chikerema does not assist anyone from the community with water, they would rather sell it to people from all over.

Like many affluent residential areas in Harare, the low density suburb boasts of a gated community status and considers its roads private community infrastructure which is being destroyed by heavy water trucks on daily basis.

What does the law say?

Zimbabwe National water Authority (ZINWA), is the institution responsible for regulating use of underground water in Zimbabwe. In 2014 ZINWA banned commercial water abstraction in residential areas but those who are politically connected end up with licenses under inexplicable circumstances. On the authority’s website its even stated that, no commercial water abstraction is allowed in residential areas. Ironically the same website has listed the bulk water enterprise in question on its website’s list of bulk water suppliers for the 2018 with full names and address.

Hardlife Mudzingwa of Community water Alliance speaking to Dry and Dirty painted a very gloomy picture of the administration of underground water resources in Zimbabwe with factors such as climate change and maladministration within local authorities playing a role in the prevailing situation. Hardlife made some observations pertaining commercial water abstraction in residential areas which is now rampant in within local authorities owing to water shortages. Bulk water businesses are the ones filling up the gap left by municipal authorities. With a daily water requirement of 1200 mega litres of water, Harare is processing 360 megalitres daily and 40% of that is being lost through leakages. It is under such such circumstances that catchment councils are relaxing laws or putting a human face as it were by allowing for boreholes to be drilled in even in high density suburbs where the stands a usually to small to drill a borehole.

Integrated Water Management Systems are not practiced in the country and there is no proper regulation system for bulk water operations.
Responsible authorities do not coordinate their activities which allows for gaps and manipulation of the system. Those who are rich and powerful end up benefiting while the poor suffer. Harare Wetlands Trust, an organization promotes the protection of wetlands in Zimbabwe is currently seized with over 10 cases where commercial water abstraction is being carried out in residential areas most of them being in low density suburbs and wetlands.

Response to the petition

Officials from Nyaguvi and Manyame Catchment councils as well as ZINWA visited the Chikerema site and they acknowledged that the business was breaching the law. According to them the permit was issued before the area was subdivided from a farm to a residential area. However, Mr Mhuri of Mount Breeze Borrowdale Association ( the petitioner) contested those claims on that basis that permits are supposed to be renewed annually which means that the authorities are sleeping on the job or they are conveniently giving a pass to such businesses. At the time of writing, no final decision has been made on whether the Chikeremas are going to be allowed to continue operating or cease their operations. If no action is taken, it will be a clear indication of the triumph of politics, power and money over the observance of the law and the rights of the citizens.