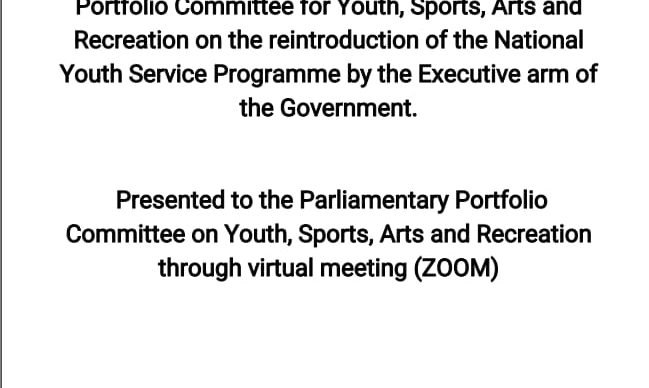 Youths have called on Government to separate the national youth service from the Ministry of Defense to avoid politicisation of the training program.

A Coalition of 10 youth organizations under the banner of National Association of Youths Organization (NAYO told the parliamentary portfolio committee on Youth, Sports, Arts, and Recreation that the program should be overseen by an executive arm of government not the minister of defense.

National Youth Service was introduced in 2001 under the administration of the late Zanu pf National Political Commissar Border Gezi but was disbanded in 2007 owing to resource mobilization challenges.

The program trained 80 000 youth at its 150 camps across all provinces in livelihood skills such as building and carpentry among other courses.

NAYO programs officer McDonald Munyoro who spoke on behalf of the coalition said a number of abuse cases including rape, denying opposition party supporters, and violation of human rights by the ideology school graduates have been reported in the past. Munyoro said this was attributed to the politicization of the institution.

Graduates of the National Youth Service are popularly known as green bombs owing to their green uniforms.

Munyoro who presented the report said youth service camps should benefit all youths regardless of their political differences.

The report highlighted how the camps are being hijacked by political parties who use youth as perpetrators of violence.

“The government should promote independence, accountability, and transparency of the NYS and there is no need for the state to facilitate the development of a National Youth Service Commission which will be responsible for recruitment process and skills training,” said Munyoro.

The report also urged government to roll out youth service programs beginning at the district level.

Munyoro further, said the NYS should not be linked with the army and advocated for the closure of all training camps sites linked to the militia citing Mount Darwin Border Gezi as linked to 2 Brigade military camps.

NAYO gave the report a response to government’s announcement on the reintroduction of the youth service.