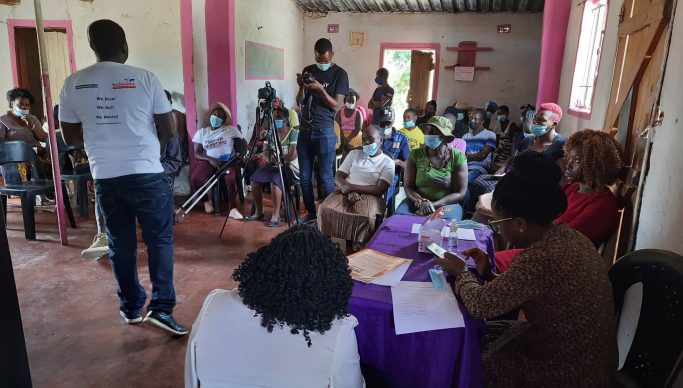 Women and persons with disabilities (PWDs) in Epworth have pledged to take a leading role in preserving the environment and lessening climate change effects as they are victims of its negative impacts.

Nyapetwa has also encouraged the women and PWDs to be at the center of preserving the environment (farmlands, mines, wetlands, and water bodies) whilst observing effects of climate change in their communities.

Chisaira went on to explain that though women, PWDs, and men experience climate change differently, the effects are felt by all. Together with the participants, they came up with adaptation and mitigation strategies to counter climate change problems.

Some of the mitigation action points that were raised are preservation of wetlands, engaging trees experts on which trees to plant, creating a climate change women action group that will be responsible for monitoring environmental issues in their communities as well as petitioning the local board to put regulations that will stop the haphazard drilling of boreholes as this endagers the water table.

Also present was disabilty and gender activist and Signs of Hope Trust director Samantha Sibanda, who noted that women and PWDs are not just victims but active agents of change as they also possess unique knowledge and skills.

Women and persons with disabilities (PWDs) who attended the meeting made a decision to form a Climate Change Action Committee made up of environmental activists, the Environmental Management Agency (EMA), relevant ministries, and the Epworth council.

The committee is set to liaise with relevant authorities in all sectors of development so that they will have representatives who will help further take climate change issues seriously.

According to the definition from the United Nations, Climate change refers to long-term shifts in temperatures and weather patterns. These shifts may be natural, but since the 1800s, human activities have been the main driver of climate change, primarily due to the burning of fossil fuels (like coal, oil, and gas), which produces heat-trapping gases.

Worldwide, climate change has resulted in shortages of water, a decrease in the amount of food production, and other threats to human health including the skin, nervous and respiratory systems.

The Community Radio Harare (CORAH) “Women and People with Disabilities for Climate Change Justice” has ignited an interest to initiate a change in residents’ views towards climate change issues.