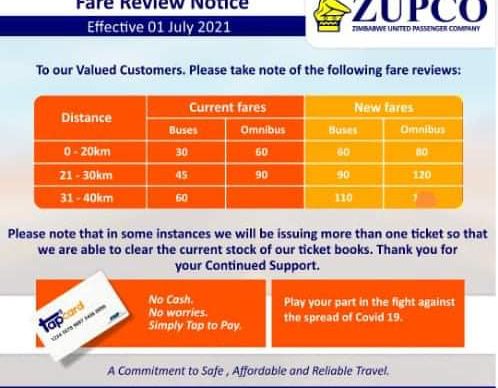 The recent hikes of commuter fares by the Zimbabwe United Passengers Company (ZUPCO) has riled the commuting public, transport associations and residents saying that it would make transport unaffordable for most citizens.

Passenger Association of Zimbabwe (PAZ) president Tafadzwa Goliath told Community Radio Harare that the fares were not affordable as people’s salaries were too low to enable them to pay $110 for the 40km to 60km route.
“Passengers would be severely incapacitated by the new ZUPCO fares” said Tafadzwa Goliath PAZ President.

With the new fare structure, passengers will now pay $110per trip for ZUPCO buses, up from $60.

Passengers at Copacabana bus terminus who spoke to CORAH expressed shock at the fare hikes. “How can they hike fares while we are in the COVID-19 period? People are already suffering and yet they continue to add more problems for the ordinary person,” complained one ZUPCO client Amos Tambalika