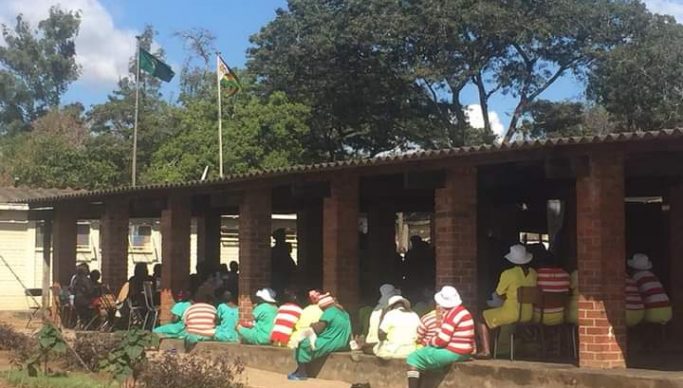 54 year old Rudo Chunyeda in 2018 found herself behind bars for drug trafficking. She was sentenced to 1 year in prison of which 4 months were suspended on good behaviour and ended up serving 8 months at Chikurubi Female Prison.

While in prison Rudo faced a lot of challenges, the most painful challenge was abandonment by her relatives, she only had her son supporting her morally and visiting her with food and sanitary wear. When Rudo entered prison she was given 2 uniforms (2 yellow dresses), a red and white stripped jersey, a pair of underwear, a tissue roll and 3 blankets. She was not provided with toiletries and sanitary wear and had to rely on fellow inmates for a while until her son visited and brought with him the necessities she desperately needed.

Rudo recounted the daily prison routine to this publication, routine starts at 7am when inmates are called out for roll call and counted to make sure no one escaped during the night, They then have breakfast in the form of black tea, sometimes porridge with very little or no sugar. The inmates then go to their work stations until lunch time at 12:30pm. They are given sadza with green vegetables, beans or mufushwa (dried vegetables). They take a break till 14:00hours when they go back to their work stations. Lunch break is for inmates to bath or wash their clothes. At 15:00hours everybody goes back for yet another roll call after which they are given supper which is the same as their lunch before they are locked in their cells. The food is prepared by inmates on long term sentences.

Rudo was one of the fortunate inmates after she was appointed as one of the children’s caretakers. Her duty was to look after children who are brought to prison along with their convicted mothers. She would spend most of her day watching over the children playing. Rudo shared that she thought her age played to her advantage to being appointment to light duty.

The children share the same cells with their mothers and they share food from the same pot as their mothers. The only time the children have goodies is when a donor comes by and they get donations in the form of food, clothing or toys.

Rudo says there is a local clinic to cater for sick inmates and medication is adequate especially for inmates on ART and those suffering from STIs. Ante and post natal care is also offered to pregnant women who sometimes get special treatment when it comes to their diet who once in a while get an egg each depending on availability. They are also taken to either Parirenyatwa or Harare General Hospitals for their monthly check-ups with gynecologists.

While in their cells, after retiring for the day, the inmates are allowed to pray and socialize with each other till lights are switched off at 7pm when they are all expected to go to sleep until 7am the following morning.

Rudo expressed displeasure at the ablution system shared by all inmates, “Inmates use common bathrooms and toilets. There is no privacy at all. They use the bucket system to flash the toilets. Children also use the same ablution area as the rest of the inmates”. Explained Rudo

On release Rudo went back to her rented room in Norton where she carried on with her life under difficult conditions. Her son was there to continue offering her support. Rudo release was met by the first phase of the lockdown period due to COVID-19 had just begun.

Though Rudo didn’t have the mind of going back to anything illegal as a means of making money, COVID-19 lockdown and lack of employment forced her to join others women doing illegal vending in the mining areas of Kadoma where informal gold mining is taking place.

Rudo says as much as she would want to avoid reoffending there is nothing much she can do for survival except what she is doing right now confirming that sometimes they are raided by police but she has also learnt how to deal with the police through paying bribes just like any other vendor affected by the raids.

The struggle continues for Rudo and many women in her situation, COVID-19 has only exacerbated the struggles of ordinary people trying to make ends meet.