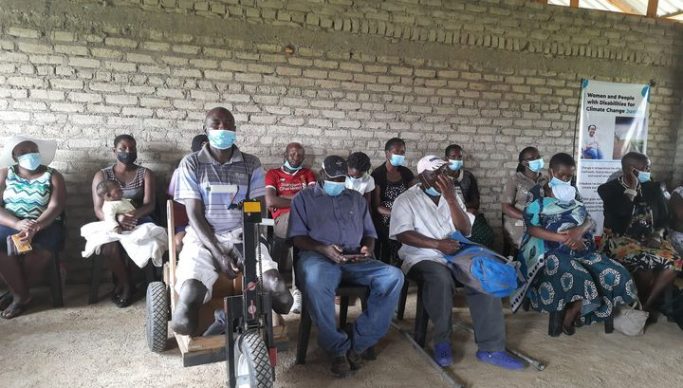 Women and persons with disabilities in Chitungwiza have called on the government and the town’s city fathers to take the construction of Muda dam as a priority so as to ease water challenges.

Chitungwiza is one of the towns in Zimbabwe that has been greatly affected by climate change leading to serious water woes. With a population of 356,840, the town has gone for years without tap water surviving with a few community water points.

The participants raised a lot of challenges they are facing due to climate change these include lack of water, sexual harassment of women and young girls at boreholes leading to an increase in teen pregnancies, poor roads caused by floods make it difficult for people in wheelchairs and crutches to move on. The participants also lamented the poor drainage system, haphazard cutting down of trees, and lack of climate change information in communities as other challenges and factors contributing to climate change.

During the meeting, the participants expressed that water is one of the biggest challenges they are facing due to the change in climate and are demanding that the government prioritize the Muda dam project which they believe will end water poverty in Chitungwiza.

Women and persons with disabilities (PWDs) who attended the live chat meeting agreed on creating a climate change action group that will organize the #endwaterpoverty campaign in Chitungwiza as a way to remind authorities of the urgency of constructing the Muda dam.

Chitungwiza Residents Trust director said residents now want tap water, she explained that boreholes have only brought a lot of conflicts and challenges for women and that these water points are not user-friendly for persons with disabilities.

“As CHITREST we have been fighting for the completion of Muda dam because we understand how women and persons with disabilities are suffering due to lack of adequate water. The dam is the only solution to this problem because boreholes no longer sustain the community due to increased population” said Alice Kuveya Chitrest director.

The women said sexual harassment cases are on the rise because of the lack of water in Chitungwiza. They expressed that young women are being abused for a bucket of water which has led them to use unprotected water sources so as to avoid abuse.

“We are being harassed at water points and now we have resorted to using unprotected water sources which are causing a lot of waterborne diseases”. said one of the female participants.

The participants agreed on a number of mitigation strategies to counter the challenges threatening their community. Some of the strategies are a need to have climate change champions who will circulate information at the community level so that residents will have knowledge about climate change, equal representation in public spaces, create an action group that will advocate for the end to water poverty through campaigns pushing for the construction of MUDA dam and engaging local leaders to put water points close to the people, and setting up recycling projects.