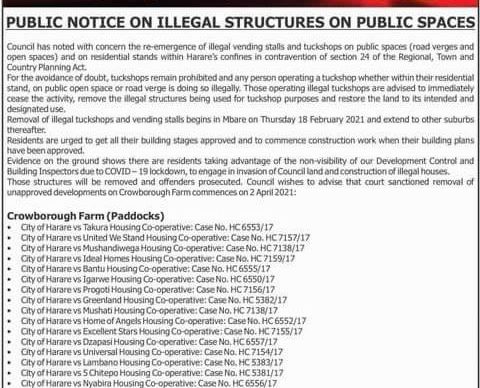 On the 9th of February, City of Harare made an announcement of an operation to demolish all illegal tuckshops, the statement advised all those owning illegal tuckshop structures to stop operations and remove them.

The demolitions scheduled for the 18th of February 2021 have provoked an outrage from residents and tuckshop owners. According to Combined Harare Residents Association (CHRA) this move will affect people’s lives since there is no employment in the country.

“The threats by the local authority to destroy livelihoods, when the government has failed to provide employment is unacceptable and must be resisted.We expect the City of Harare to go and demolish ,tuckshops erected at Council premises at corner S.Muzenda and J.Moyo leased by ZANU PF” said Reuben Akilli CHRA communications officer.

Some Harare residents who spoke to CORAH expressed displeasure at the recent move by city of Harare, the residents accused the municipality for failing to deliver services like collection of refuse and provision of ambulances at local community clinics but seem to be available when they need demolish illegal structures.

“We don’t have a government how can you destroy tuckshops how do you expect those people to survive in this country where you destroyed without jobs or ways of getting income ,this is a wrong move from an old government that always think of looting and nothing else.” said Clappeton Nyatio, a resident.

“Does City of Harare know its core business in the first place? It is always anti people especially the poor. They must go and clean Market Square.” complained another Harare resident.

Another resident also lashed out at city of Harare council on uncollected refuse, “Why can’t with they pick up load of garbage laying all over town than focus on destroying people’s lives in this hard economy” ,

Meanwhile City of Harare says announcement was an instruction from the Ministry of Local Government and Public Works hence their duty was to notify residents.