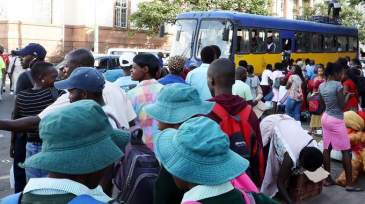 While the majority of citizens have been affected by the absence of viable transport school children from underdeveloped suburbs such as Caledonia are the most affected., following the government’s decision to open schools after three months of the COVID-19 induced closure.

Opening schools while banning private players popularly known as Mshikashika has become a nightmare for school children who live in Caledonia a suburb without roads.

Caledonia Residents Association Trust says school children are facing transport challenges such that they fail to get to school on time.

“We have noted the difficulties encountered by school children when schools opened. The situation is dire and the authorities must consider the transport situation of Caledonia. Our findings show that there is a need for dialogue between police, kombi owners, and residents. The absence of roads and schools make the Caledonia issue abnormal. The safety of school-going children must be of paramount importance to all stakeholders. We will strongly condemn any hard maneuvers by police which will endanger the lives of school children” said CRAT Secretary Wellington Chirimba.

ln, an interview with CORAH parents of the children said they are urging the government to address this dire situation. “The government of Zimbabwe must address the transport crisis, If Zupco buses were readily available in Caledonia for the commuting public, I don’t think Mushikashikas will be ferrying people,” said Caledonia resident.

Meanwhile, the government has reintroduced the commuter train system as a way to ease transport crisis in the urban areas since Zimbabwe United Passengers Company (ZUPCO) has been struggling to meet the demand for public transport. This move will benefit some suburbs with railway lines but not Caledonia.