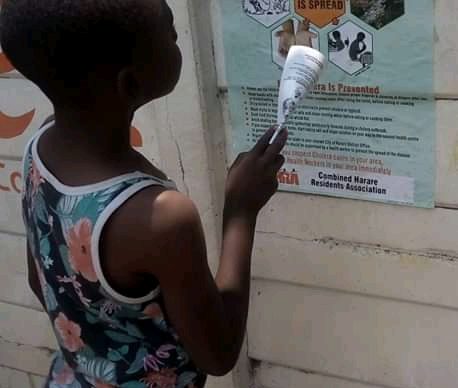 Combined Harare Residents Association [CHRA] has taken the initiative to educate residents from Ward 34 in Mufakose on the outbreak of Cholera. The initiative meant to curb a possible outbreak comes at a time the country is approaching rainy season.

Residents in the area were encouraged to try their best to maintain household hygiene despite poor sanitation, burst sewer pipes and uncollected garbage in their area.

In interviews conducted with residents they called on city fathers and non-governmental organizations to help repair burst sewer pipes as a matter of urgency before rains start. Residents expressed fears of having to deal with a possible cholera and typhoid outbreak while still battling COVID-19 if these issues are not attended to as soon as possible.

“Mufakose is a very busy place with many activities taking place everywhere 24/7” said Jesse Mapuranga a vendor who sells farm produce products like tomatoes, onions, potatoes. Jesse complained that the area she and her fellow vendors conduct business needs immediate attention in order to avoid the outbreak of Cholera.

Mufakose Ward 4 Councilor Loveness Gomba applauded CHRA for the initiative to educate residents in her community as good to keep people updated and educated on issues like Cholera as it is their right.

The councilor reiterated that the initiative by CHRA is important as it elevates standards of Mufakose as a society and it also help identify problems in the community quickly.