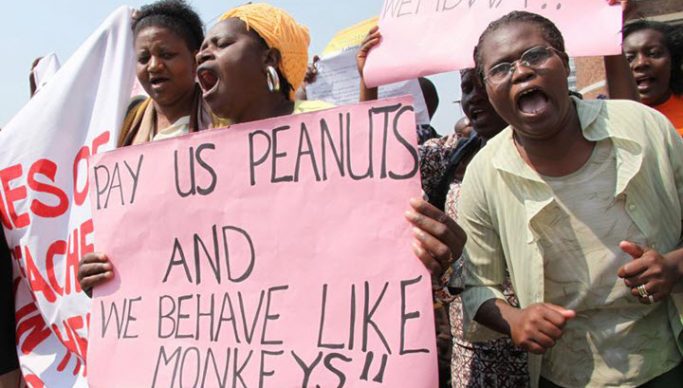 Teacher associations have argued that the government’s pledge to increase salaries for heads between 10% to 25% depending on the number of pupils per school is inappropriate means of dealing with challenges tossing the education sector as their plight remains unsolved by this move.

Responding to the state’s move to increase salaries for school heads, Progressive Teachers Union of Zimbabwe (PTUZ) president
Takavafira Zhou called on school heads not to fall into the government’s trap urging them to join the battle and fight for all educators.

“We perceive it as an attempt to clamp down on teachers’ freedom and hoodwink school heads to think that the government is caring. This is tailor-made to seduce School heads to manage examination and descent heavily on teachers. School heads must join together with the classroom teachers to fight for a living wage that is pegged at an average of $540 USD”, said Zhou

Zhou went on to reiterate that the government should not turn a blind eye to their long-standing unresolved issues as only the proposed USD540 living wage is a recipe for quality public education.

“We must also remain vigilant and resilient and ready to reach a higher level punctuated by the total withdrawal of labor and non-invigilation of examinations”, said Zhou

Other teacher associations all added their displeasure at the government’s move and promised to hand down the tools if their pleas are not fulfilled.

“Teachers are demanding that the employer must pay bonus in united states dollars this month of November 2021, because teachers are sinking deeper into incapacitation each and every day, this is the only way to avert crushing them deeper into poverty and dysfunction”, said Zimbabwe Teachers Association (ZIMTA).

According to ZIMTA November 2021 Declaration, “Failure to meet these demands from the educators, within the above specified time frames may lead into disruptions of activities within schools, compromising the quality and equal access to education for learners, disturbing examination invigilation and ultimately the failure of moderation and capture of CALA results”.

“Government is advised to urgently table a new salary structure for teachers before the 15th of November. We maintain that teachers should be receiving their Pre-October 2018 salaries anything else is not acceptable. For 12 days running from 15 November teachers will be on a serious job action”, said Amalgamated Rural Teachers Union of Zimbabwe (ARTUZ) president Obert Masaraure.

Meanwhile, educator unions are calling for a peaceful physical and online demonstration from 15th of November 2021 in-demand of salaries and end-of-the-year bonuses to be paid in United States dollars.