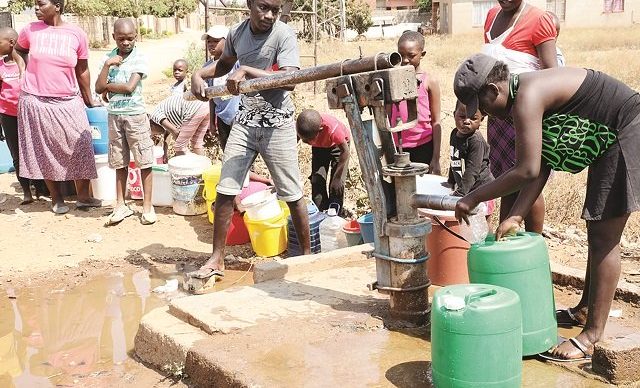 For the past two years Zimbabwe has been receiving low rainfall partly due to climate change and this has resulted in less water being pumped by the local municipality of Harare and this has worsened during Covid19 era with women being mostly affected.

Warren Park is one of Harare’s suburbs with an estimated population of over 600 people. Residents here have faced a number of challenges with insufficient water supply caused by climate change induced drought over the past years.

These high density residents are dependent on donor drilled boreholes and these water sources are unsafe due to poor sanitation and burst sewer pipes that have not been attended to by city authorities. The boreholes seem to be getting fewer by the day as broken ones are not fixed.

Speaking to Community Radio Harare Mrs Mamota one of the community borehole committee leaders said “We have a borehole which supplies many people and no-one is assisting us to maintain this borehole and we have a sewage problem at this borehole, the sewage flows through the drain which is closer to the borehole”

“The stench from this sewer disturbs people from fetching water people jus continue fetching from here because the tap water is dirty,” says Mrs Mamota.

Mrs Mamota explained that despite these challenges, the committee has been working hard to teach residents on hygiene and other World Health Organisation recommended safety guidelines against COVID-19 at water points

“In order to reduce the spread of Covid19 there are sanitising, practising social distancing, and if one is not wearing a mask they are not allowed at the borehole,”

Mrs Moyo another committee member expressed displeasure at the council for failing to assist them to maintain their water points, she also shared the insults experience they get from community members who label them thieves.

“We were once reported to the police accused of stealing funds we collect to maintain the borehole and we have been insulted a lot in our community which is a problem as women in local leadership.”

Section 77 of Zimbabwe’s Constitution states that “every person has a right to safe, clean and potable water and the State must take reasonable legislative and other measures, within the limits of the resources available to it, to achieve the progressive realisation of this right.”