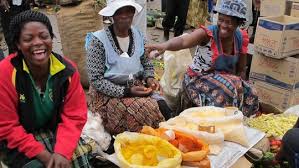 In an effort to improve the socio-economic lives of women in the informal sector,
Vendors Initiative for Social and Economic Transformation (VISET) has launched Informal Economy Women’s Hub (INEWOH) to address challenges that are tossing female traders at all levels of society.

In an interview with VISET Communications Officer, Jabulani Chikomwe told Community Radio Harare (CORAH) that the informal economy constitutes the majority of women who are operating under unfavourable conditions across Zimbabwe, hence this called for INEWOH to address their plight.

INEWOH will be an information-sharing platform for VISET members and other partner organizations working together to put an end to challenges that informal female traders face.

During the launch, Zimbabwe Coalition on Debt and Development (ZIMCODD) Executive Director Janet Zhou condemned some authorities including municipal police who are taking advantage of vulnerable women in the informal sector through sexual exploitation.

Zhou further added that at times these women are unlawfully arrested, end up losing their wares, and are forced to pay money for bribes to get market space from barons.

Deaf Zimbabwe Trust Executive Director Barbara Nyangairi noted with concern that women with disabilities are more vulnerable as they encounter twice the abuse compared to their able-bodied counterparts in the informal sector.

Nyangairi went on to explain that the communication barrier on sign language still remains a challenge. According to Deaf Zimbabwe Trust, many women from the deaf community are forced to survive on informal trading resulting from a lack of access to education among children with disabilities.

A survey carried out by CORAH yielded that almost every female vendor in the country is silently suffering from challenges highlighted in the meeting.

Meanwhile, VISET is ready to work with all stakeholders who wish to contribute to INWOH as a key driver to solving problems faced by women in the informal sector.