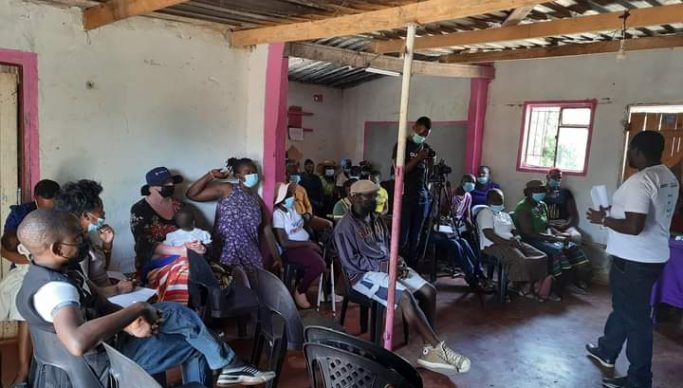 Community Radio Harare supported by WAN-IFRA African Media Grants is taking the climate change message from hotel conferences to the grassroots. The project’s objective is to engage communities to share challenges that are faced by women and people with disabilities due to climate in different target areas of Epworth, Hopely, Mabvuku, and Chitungwiza.

Research has shown that climate change disproportionately impacts the rights of persons, groups, and people in vulnerable situations. According to the Intergovernmental Panel on Climate Change (IPCC), people who are socially, economically, politically, institutionally, or otherwise marginalized are especially vulnerable to climate change and also to some adaptation and mitigation responses.

Human Rights Council resolutions on the subject of human rights and climate change including resolutions state that the impacts of climate change will be felt most acutely by those segments of the population who are already in a vulnerable situation.

It is on this premise that CORAH brought on board gender and disability defender Samantha Sibanda who highlighted the importance of inclusivity in all aspects of life in communities, more so in climate change mitigation as people with disabilities and women are mostly affected by the changes. She said there is a need for equal representation in local councils and organisations that deal with climate change issues. She urged participants to be responsible, participate and cultivate an interest in environmental policy-making discussions.

Speaking at the same event environmental lawyer and Advocates4Earth founder Lenin Chisaira explained that women and people with disabilities could not be left out in the climate discourse. Chisaira who is also a researcher in the field explained in detail the effects of climate change and the importance of these discussions. He also shared laws that guarantee citizens of safety during climate change processes. Some of the laws are found in the Civil Protection Act, the Constitution of Zimbabwe, and the Environmental Management Act.

Chisaira also explained the connection between climate change and genders, such as how women are at times forced to walk long distances in search of water and firewood.

“Climate change has negatively impacted us as women, boreholes in Epworth are not enough and water tables are now low this leads to more cases of women being sexually harassed,” said one of the women who attended the live chat.

The women and persons with disabilities came up with a number of mitigation and adaptation strategies to counter the effects of climate change in their communities. These strategies are creating a climate change women action group that will monitor environmental issues in their communities, active participation from residents in the preservation of wetlands, creation of a council special group that will represent persons with disabilities, engaging trees experts on which trees to plant, petition the local board to regulate and stop the haphazard digging of unsafe water wells which has negatively affected the water table, and simplifying the Local Environmental Action Planning (LEAP) document to local languages.