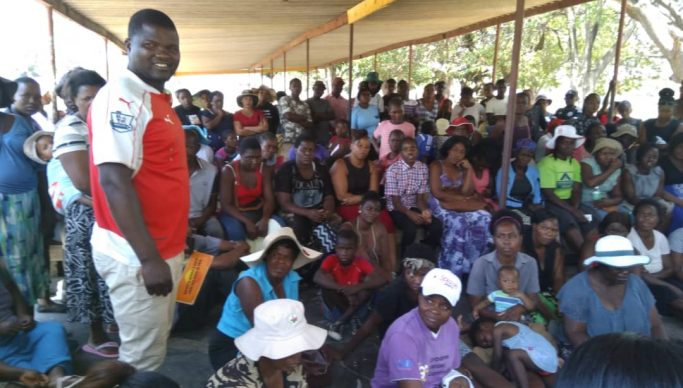 Furious parents and guardians took Sunningdale 1 Primary School by surprise when they demonstrated against the school authorities over abuse of office demanding the immediate removal of the school head.

Concerned parents and guardians started to gather at the school entrance from as early as 05:00 hrs ready to demonstrate and air their displeasure at the school administration.

School authorities stand accused of corruption, lack of transparency and accountability. The irate parents are pushing for the sacking of the school head and his accomplices including the school secretary, School Development Committee (SDC) and security guards.

The school head Mr. Zviripi has been accused of corruption allegations that are said to have hindered the development of the school. Concerned parents say that the school environment is no longer conducive for the school pupils as the infrastructure is now dilapidated and standards are dropping at an alarming rate.

Teachers at the school are also said to be short-changing the learners by conducting extra lessons at $5 USD per month per child. Those who fail to pay the $5USD will not get extra attention from the teacher, all this is happening under the head’s very nose.

Collin Nyangani spoke on behalf of parents and read through a list of grievances to officials from the Ministry of Education who came to contain the situation. Nyangani said that ” they no longer want to see Mr. Zviripi anywhere near the school premises and must be removed with immediate effect or suspended while investigations take place”.

Earlier on in the week the parents held a meeting and agreed on a vote of no confidence in the SDA with 100 plus signatures. It also alleged that the SDA has got people who do not have children at the school as sitting members.

The headmaster is reported to have been sneaking on and off the school premises unnoticed on several occasions for over a week. Parents suspect is avoiding them and potentially scared of getting arrested since he knows that they are baying for blood. Representatives from the ministry of education promised to forward the grievances to the district head for further deliberations.